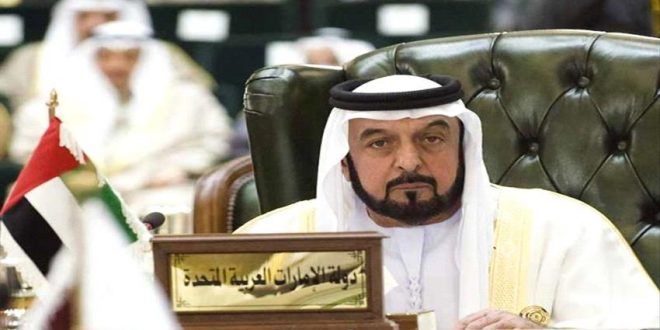 The president of the United Arab Emirates, Sheikh Khalifa Bin Zayed Al Nahyan, announced in Saturday, that the year of 2019 will be the “year of tolerance” in the country.
Sheikh Khalifa Bin Zayed Al Nahyan, confirmed that it establishes the UAE a global capital of tolerance, and stresses the value of tolerance as institutionally sustainable work, through a range of legislation and policies aimed at deepening the values of tolerance, dialogue and acceptance of others and openness to different cultures especially among the new generations as reflected in its positive effects on society in general.
The president of the UAE considered the year of tolerance is an extension for the “year of Zayed”, as it has the highest values that the work of Sheikh Zayed Bin Sultan Al Nahyan instilled among the sons of the UAE, according to Emirates news agency “WAM”.

He stressed that the declaration of 2019 year of tolerance reflects the approach adopted by the UAE since of its establishment in to be a bridge of communication and convergence among the world’s peoples and cultures in an open environment based on respect and repudiation of extremism and acceptance of others .
For his part, the deputy chairman of the Emirates prime minister and Ruler of Dubai, Sheikh Mohammed bin Rashid, stressed on the need to establish the values of tolerance, rejection of extremism and openness on cultures and peoples as an orientation of society, involving all levels of society including all the government sectors, private and general.
Also Sheikh Mohammed bin Rashid called to make the “year of tolerance ” a year of achievements, initiatives, projects and programs that embody the important values of tolerance, especially in the current time.

On this occasion, the Crown Prince of Abu Dhabi and Deputy Supreme Commander of the Armed Forces Sheikh Mohamed bin Zayed: said ” the UAE is the address of tolerance, coexistence and openness to the other”, stressing the important role “played by the UAE in the consolidation and dissemination of the concepts and values of tolerance, coexistence and peace among various peoples of the world “.
Axes.
The “Year of Tolerance ” will be focus on the five main themes the first is to deepen the values of tolerance, openness on cultures and peoples in the community by focusing on the value of the tolerance with the new generations.
Second, to establish the UAE as the world capital of tolerance, through a range of initiatives and major projects in this framework of research contributions, social studies, cultural and specialized in the field of tolerance and dialogue of cultures and civilizations.

The third axis, is the cultural tolerance through a range of community, diffrent cultural initiatives,and fourth axes includes a put forward legislation and policies aimed at the institutionalization of the value of cultural and religious, social tolerance, and finally enhanced speech tolerance and acceptance of others through meaningful media initiatives .